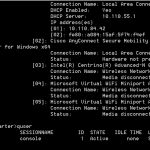 To log off session listed in the previous step, use the following command. Here I am trying to log off the session 0.
C:\> logoff /SERVER:xx.xx.xx.xxx 0 /V

The port numbers are divided into three ranges: the Well Known Ports,
the Registered Ports, and the Dynamic and/or Private Ports.

The range for assigned ports managed by the IANA is 0-1023.

The nbtstat – a < name > or nbtstat – a < IP address > command performs a NetBIOS adapter status command on the computer name specified by < name >.

nbtstat -n displays the names that have been registered locally on the system by NetBIOS applications such as the server and redirector.